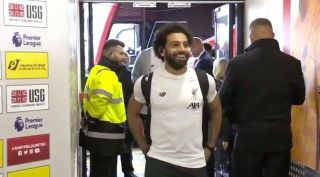 Mohamed Salah seemingly isn’t a popular man in Sheffield, as the Blades fans reserved a special welcome for him as he arrived at Bramall Lane on Saturday.

The Liverpool players were making their way to the dressing room as they stepped off the coach, and it’s fair to say that they weren’t given a warm welcome from the home faithful.

As seen in the video below, it wasn’t just Salah in fairness as Virgil van Dijk appeared to cop a load of boos too as the Utd fans seemingly tried to create an intimidating atmosphere immediately.

However, Salah was also given an earful as he stepped off the coach, with BT Sport pundit Joe Cole noting that “it’s all kicking off here” as the noise could be heard on the broadcast.

The Liverpool superstar was all smiles though as he laughed off the reception as he was given a more friendly welcome by the BT team as he shook hands with them on his way to the dressing room.

The Merseyside giants will have faced plenty of hostile grounds and supporters in their time, and it’s highly unlikely that they will let that affect them on Saturday as they go in search of seven straight wins to start the Premier League campaign.

A warm Sheffield welcome for Mo Salah and the European champions at Bramall Lane!