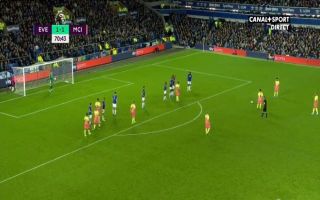 What is it about the form of England goalkeepers? They seem to have a good few years and then completely fall off a cliff. Joe Hart and Jack Butland have been awful lately, and we’re starting to see Jordan Pickford getting caught out.

Failure to win here for City would see Liverpool take a seven point lead at the top of the league already, so it’s absolutely vital that they get a win against Everton.

It was looking like the game was headed for a 1-1 draw until Mahrez caught Pickford out with this free-kick:

It’s hard to tell if he is caught out by expecting the Algerian to go for his near post, or if he’s un-sighted and takes too long to react but he has to do better with this.