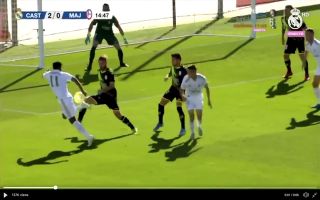 Just 15 minutes into Castilla’s (Real Madrid B team) clash today, wonderkid Rodrygo pulled off a magical piece of skill before putting the ball into the back of the net with a lovely finish.

The ace made a stunning flick look effortless as he managed to hold off defenders before slotting the ball into the back of the net from an extremely tight angle.

Take a look at the 18-year-old sensation’s magical goal below:

Rodrygo also showed his lightning fast speed and dazzling dribbling later in the game, his teammate really should have put this chance away:

Should be 4. But gives you a glimpse of how easy it is for Rodrygo at this level. pic.twitter.com/kWFCt2E9tt

According to the Guardian, Zinedine Zidane’s side parted with €45m to sign the winger from Brazilian side Santos.

The ace’s start to life at Madrid has gone perfectly so far, the tricky winger will be hoping for some more first-team opportunities in the near future.