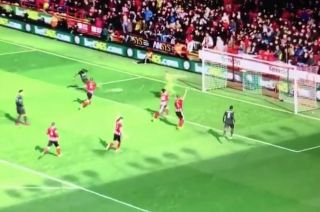 Liverpool found it tough going against Sheffield United on Saturday, but they did have two excellent chances to break the deadlock in the first half.

Both opportunities fell to Sadio Mane, but after completely slicing an effort wide after a ball over the top from Virgil van Dijk, he couldn’t find his goalscoring boots after that either.

As seen in the video below, the Liverpool forward was put in after some swift Liverpool build-up play as they tried to catch the Blades on the counter attack.

However, despite a brilliant pass from Roberto Firmino to give his teammate time and space to apply the finishing touch, Mane could only send his strike crashing off the post as Sheffield Utd went on to clear their lines and get rid of the danger.

It’s not been a great day for Mane thus far, but ultimately if the hosts continue to give him and Liverpool chances like this, they’ll be backed to finish at least one of them as they go in search of a seventh straight win to start the Premier League campaign.

?Sadio Mane won’t be happy with that. pic.twitter.com/qoct8h0y2M

Liverpool were THAT close to making it 1-0 before the break!

Tune into NBCSN to catch the 2nd half of this one, or stream it here: https://t.co/CsjFpf1HEU pic.twitter.com/qG74zpNgCA