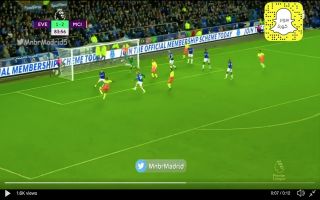 Manchester City superstar Raheem Sterling has marked his 200th appearance for the Sky Blues with a thunderous volley in today’s clash with top six hopefuls Everton.

England superstar Raheem Sterling scored a thunderous volley for Manchester City to seal a win for the Sky Blues in the 84th minute of their clash with with Everton.

Talisman Sergio Aguero played a low cross into the six-yard box that was turned away by Jordan Pickford, the ball dropped to Sterling and he showed just how much his game has come on recently by staying composed and unleashing a lovely volley on goal.

The ball rattled off the crossbar but the referee deemed that the ball crossed the line, with replays confirming this.

Take a look at the attacker’s goal below:

The strike also marks a historic moment for Sterling, the ace managed to score his 100th club career goal on his 200th appearance for the Premier League champions.

Raheem Sterling has now scored 100 goals across all competitions in his senior club career.