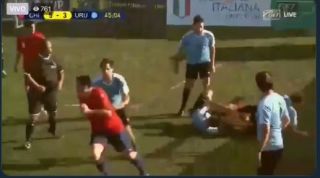 I didn’t even realise there was a 7-a-side World Cup, but it looks pretty entertaining. Think of when Sky Sports used to have those weird masters tournaments on blue indoor pitches, only these players are able to run without throwing up.

Chile and Uruguay are two of the more combative teams in world football, so it’s wonderful to see that those tempers are still present at this level too.

It’s brilliantly reminiscent of something you might do in the playground as a kid. The Chile player stops a goalbound shot on the goalline, only to get on his knees and head it in from the ground:

We also don’t see enough of this kind of reaction in European football. Usually clashes turn into a bit of finger pointing and shouting while trying to look threatening, but we all know that nothing will happen.

It seems quite South American to see a player run for his life while a baying mob gives chase and attempts to kick him to the ground.

Unfortunately it’s quite difficult to find out who went on to win the game of if any cards were dished out following this, but in many ways it doesn’t really matter.