Arsenal take on Manchester United on Monday evening with perhaps their best chance in years of ending their absolutely shocking run at Old Trafford.

The Gunners haven’t won away to United in the Premier League for 13 years, and fans would dearly love to see new manager Unai Emery make a statement with a big win here.

We’re yet to really see the best of Arsenal under Emery or have a clear idea of what the Spanish tactician is trying to do at the Emirates Stadium, and he may not have too long left before those at the top start asking serious questions about him.

This United side, however, is also in a pretty dire state and look like having a number of players missing through injury for this game.

This could give Arsenal the chance to take a bit of a gamble and rush back Kieran Tierney and Rob Holding, despite the pair only just playing for the first time this season in the midweek Carabao Cup win over Nottingham Forest.

While this could come back to haunt AFC, it is surely unthinkable that they go into this big game with Sokratis Papastathopoulos in defence again after his poor start to the season, while Sead Kolasinac is also too unreliable at left-back. 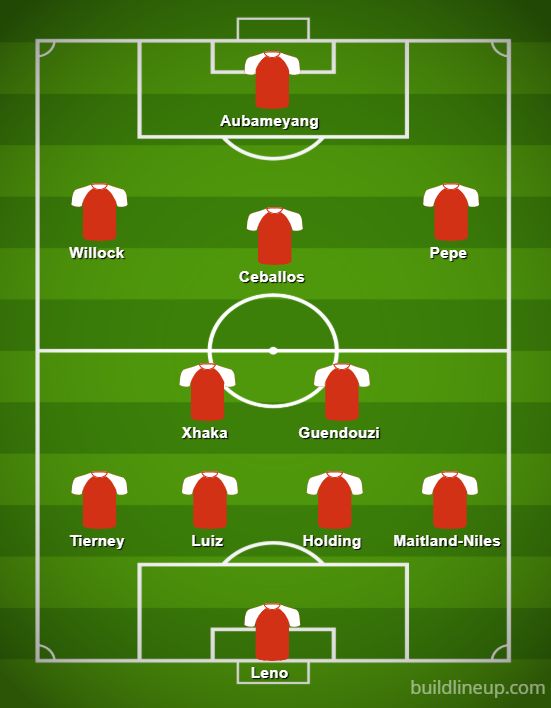 See above for the team we’d go for, with Holding partnering David Luiz, while Tierney makes his Premier League debut since his summer move from Celtic.

The Express report that Mesut Ozil looks set to miss this one, so Dani Ceballos is surely the automatic starter in that number ten role.

Joe Willock has made a fine start to the season and deserves to keep a place in the attacking midfield area, while we should also continue to see Nicolas Pepe and Pierre-Emerick Aubameyang developing their partnership.

While many fans won’t want to see Granit Xhaka in the starting XI, it seems certain he’ll be involved given he’s just been made club captain in a slightly bizarre call by Emery.

Arsenal fans can hope, however, that this reasonably strong line up can give Man Utd a good game this Monday night.