After a hard-fought win over Sheffield United, Liverpool will resume their Champions League campaign against Red Bull Salzburg at Anfield.

The Reds lost their tournament opener to Napoli in Naples but will be hoping to register their first win of the competition on Wednesday. The reigning champions haven’t lost a Champions League home game since 2014 and they have every chance of winning.

Red Bull Salzburg thrashed Genk 6-2 in their last fixture thanks to a hat-trick from Erling Haaland. However, it will be tough for the Austrian club to net that many against Liverpool.

In goal, Liverpool will most likely have Adrian. The 32-year-old kept his second clean sheet yesterday but is yet to not concede a goal in a home game. He will hope to keep the Red Bull attackers at bay.

In defence, the one change Jurgen Klopp might make would be starting Joe Gomez ahead of Joel Matip. The 22-year-old might be given some game time after spending most of this season on the bench so far. Virgil van Dijk will most likely start in the heart of defence while Andy Robertson and Trent Alexander-Arnold should be the two full-backs.

Klopp might rotate his midfield by starting either of James Milner, Alex Oxlade-Chamberlain or Naby Keita. Keita might find a place in the team sheet and Jordan Henderson could be on the bench. Fabinho and Gini Wijnaldum should start.

In the forward department, there’s little chance Klopp will field any one other than Mohamed Salah, Sadio Mane and Roberto Firmino. The trio will be hoping to find the net and help Liverpool register their first win of the Champions League. The one change that may be possible would be Divock Origi coming in for either of Sadio Mane or Robert Firmino. 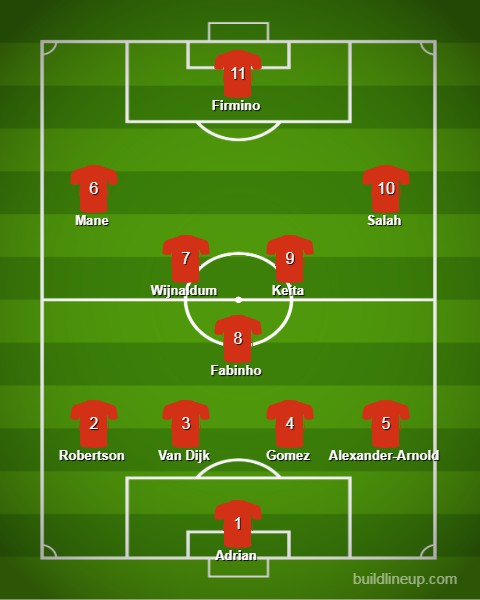