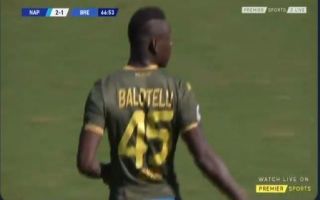 Mario Balotelli is one of those players that it’s almost impossible to tell how good he is/was. For every outstanding spell and contribution to a club, he would have a terrible one.

This is seen as his last big chance to salvage his reputation and become a hero in Italy again. He’s signed with Brescia and will have an eye on the Italy squad for the upcoming Euro 2020 tournament.

He was great for Inter, AC Milan and Man City but also had a horrible spell at Liverpool and a poor loan spell back in Milan, so he will need to show consistency to get himself back into the national team conversation.

He’s got himself back among the goals almost immediately by scoring against Napoli today with this brilliant header:

? There’s no ruling this one out as Balotelli powers home the header from the corner to cut Napoli’s lead back to 2-1! pic.twitter.com/q9LPIFOXO0

Unfortunately it was a goal in a losing effort, but it shows his hunger is still there. He’s often seen as a luxury player who doesn’t get stuck in or score goals like this, so it’s great to see.

It’s also interesting to note this was his first Serie A goal for quite some time:

What a day for Mario Balotelli! ?

…And walks out with daughter Pia ? pic.twitter.com/YP7lQKbbpv