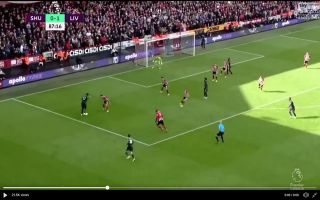 Some Liverpool fans loved this magical piece of skill from Divock Origi during the Reds’ narrow 1-0 victory against Sheffield United this weekend, take a look below.

Liverpool ace Divock Origi changed the game when he came off the bench against Sheffield United this weekend.

The 24-year-old’s crucial cross led to Gini Wijnaldum’s winner, the forward also dazzled fans with this moment of magic in the final stages of the match.

Origi showed off some lovely skills and dribbling to get past his man before pulling his shot just wide of the near post. This would’ve been a fantastic goal.

Take a look at the Belgian’s lovely footwork below:

Here’s how some fans reacted to the ace’s lovely dribbling:

Also origi turned into prime ronaldinho today with that skill and shot off the post?

that skill from Origi oh my

I’ve always rated Origi. He’s always positive and never short on confidence. That’s how he plays from day 1 to now.

Would have loved if he had gone across the keeper with the shot. Did everything perfect.

My favourite skill of the match

That had top right bin written all over it…?????

Origi has come on leaps and bounds under Jurgen Klopp’s tutelage. It’s fair to say that some people had the Belgian down as a flop after a frustrating start at Anfield.

With injuries behind him, the forward has looked sensational over the last 18 months. Fans obviously love the Belgian for his crucial goals last season, but his overall impact on games is often overshadowed.

The ace is starting to get the respect he deserves.