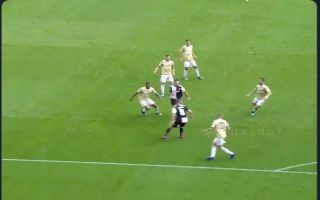 There has to come a point when Cristiano Ronaldo starts to lose a bit of his aura, maybe he will lose a yard of pace or something, but he still looks to be completely unstoppable right now.

The move to Italy hasn’t affected him as he’s settled in and continues to torment defences. Yesterday it was the turn of SPAL to try and stop him.

This run and cross almost resulted in a fantastic goal, only a great stop by the keeper got in the way. He might get a tad lucky with one ricochet, but the control and pace is still incredible to see:

Cristiano Ronaldo at the age of 34 ? pic.twitter.com/E3rf5lSWIw

Juventus managed to win the game and of course Ronaldo scored in a 2-0 victory. Perhaps this can be the year he takes them all the way in the Champions League too.