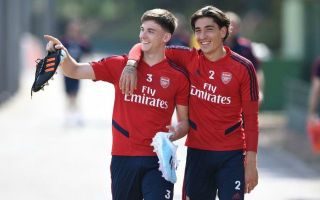 The Spaniard sustained an Anterior Cruciate ligament injury in January during a match against Chelsea which forced him to miss the remainder of last season. He made his return to the senior team in the Carabao Cup fixture against Nottingham Forest, assisting Joe Willock soon after coming on as a substitute for Kieran Tierney.

Nicholas feels that Unai Emery should start Bellerin in tonight’s fixture at Old Trafford. In his column for Sky Sports, the Arsenal legend wrote: “Hector Bellerin played a little bit against Nottingham Forest. Ainsley Maitland-Niles is suspended and though Unai Emery has been cautious about him, I think Bellerin should play. Kieran Tierney should be in, but Rob Holding will miss out I think.”

Before getting injured, Bellerin was a key first-team player for Arsenal and with Ainsley Maitland-Niles out, Emery might give the 24-year-old his first start of the season.

The Gunners are currently 8th in the Premier League table but a win tonight can take them to at least fourth. It will also mark the first time Arsenal will win a league game at Old Trafford since 2006.