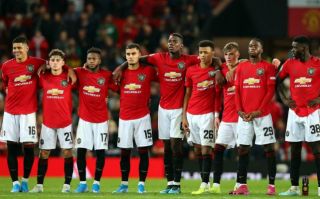 It’s early days but it already feels like Manchester United’s season hangs in the balance against Arsenal tonight.

The Red Devils have not made a convincing start to the season by any stretch of the imagination and must send a message to their fans tonight that the Ole Gunnar Solskjaer project is going somewhere.

The Norwegian is a club legend and started well at Man Utd, which might afford him more time than most, but since landing the job permanently the team’s form has rather alarmingly gone off a cliff.

In many ways, Arsenal could be welcome opposition as they represent a potential big-name scalp, but are also a team going through transition, with the added benefit of a shocking record at Old Trafford.

Still, United can take nothing for granted against a quality side and will need big games from these five stars in particular if they are to take all three points…

A world class goalkeeper who’s gone through a poor spell of form in recent times, David de Gea now needs to put all that behind him after signing a new contract.

Red Devils fans will hope the Spaniard is fully focused again and can produce those big-game performances of old, instead of some of those recent calamities against Barcelona, Chelsea and Crystal Palace.

For all Arsenal’s weaknesses – and yes there really are plenty – they have a fearsome attack that should create plenty of chances, with some elite De Gea saves likely to be needed at some point in tonight’s game.

We’ve put two players together here, with United’s centre-backs urgently needing a big game after an unconvincing start to the season together.

While the pairing showed some promise in that opening day thrashing of Chelsea, it’s clear that MUFC fans will have expected more from summer signing Harry Maguire in particular.

These are the games he was signed for, and he’ll need to have a good connection with Lindelof if they are to combat the likes of Pierre-Emerick Aubameyang and Nicolas Pepe.