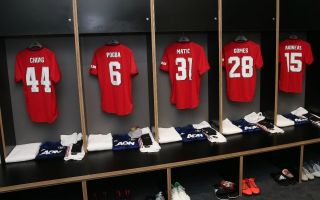 Manchester United take on Arsenal tonight and have some mixed injury news ahead of the big game at Old Trafford.

According to the Manchester Evening News, the good news is that Paul Pogba and Marcus Rashford seem to be in the squad so could be fit enough for some involvement against the Gunners.

Pogba has not had the best season for Man Utd but should be a useful option for the club in this big game as their other remaining midfield options aren’t ideal either.

Meanwhile, Rashford’s return up front could be hugely important for the Red Devils as they’d otherwise likely be relying on 17-year-old Mason Greenwood up front.

One potentially big negative for Ole Gunnar Solskjaer and co., however, is that the MEN claim Aaron Wan-Bissaka was not spotted with the squad today.

Marcus Rashford could be back for Manchester United against Arsenal

This points towards the in-form right-back missing this big game, with United down to the bare bones at the back.

Luke Shaw doesn’t look to have returned from injury either, according to the MEN, meaning United have a problem in the full-back positions.

Ashley Young may have to move over to right-back to cover for Wan-Bissaka, leaving youngster Brandon Williams as an option at left-back.

Against an attack as potent as Arsenal’s, this is far from ideal for MUFC.