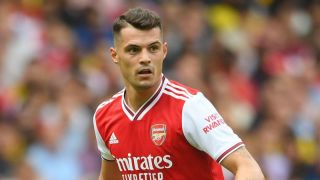 Scott McTominay gave Man Utd the lead against Arsenal just before half-time on Monday night, and some eagle-eyed Gunners fans spotted something they weren’t happy with.

As seen in the image and video below, captain Granit Xhaka was caught ducking his head down as the ball flew over him and into the back of the net for the opening goal of the game.

In his defence, it was arguably just a natural reaction as he looked to protect himself from being hit in the face and many of us would have probably reacted the same way in that split second even if it wasn’t our intention.

However, it’s certainly not a good look for the Arsenal captain, and it earned him some stick on Twitter after, as seen in the tweets below.

As noted by The Sun, the Swiss international has received plenty of criticism and scrutiny after being named Arsenal captain, and it arguably isn’t the greatest selection to lead Unai Emery’s side given his questionable performances at time.

Nevertheless, he’ll have a lot to do now to turn opinion, as his ‘duck’ went viral during Monday’s clash and judging from the responses below, many Arsenal fans are not happy with him and have another reason to be critical.

In the bigger picture, the visitors will be hoping that they can bounce back from such an untimely setback to take something from the clash and ensure that this isn’t a major talking point come Tuesday morning.

Xhaka fans this is your Captain moving out the way pic.twitter.com/LPhcLpzxut

Xhaka was so bloody lazy for that goal. Just stood there dawdling throughout the whole passage of play – no pressure, no urgency, no leadership. He’s not a captain. From Adams & Vieira to this – horrible. ?#MUNARS

Xhaka ducked out the way.

Xhaka ducked. What the hell is wrong with him

Image: Club captain Granit Xhaka ducking out of the way of Scott McTominay’s opening goal of the game. ? pic.twitter.com/WKxcjE3A3S

Fucking Xhaka ducking under that – there’s your captain Unai you twat pic.twitter.com/1SixRjZGFm

GET OUT OF MY CLUB pic.twitter.com/49n8ntpsqU