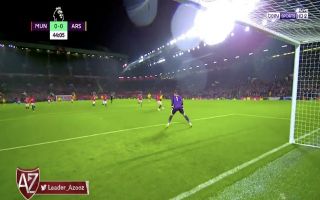 David de Gea’s heroics in between the sticks for Manchester United have ensured that they hold a 1-0 lead over Arsenal at Old Trafford this evening.

The Red Devils hold the advantage in Monday night’s Premier League clash thanks to a superb Scott McTominay strike just before the interval.

However, Arsenal might have gone in front themselves moments earlier, as Nicolas Pepe found himself in space inside the United penalty area.

The Ivorian fired a shot towards the bottom corner and De Gea pushed it away superbly, before also getting down to palm Matteo Guendouzi’s follow up effort out for a corner.

Props to @D_DeGea for a HUGE double save moments before the #MUFC opener! #MUNARS

The Red Devils have De Gea to thank for keeping the Gunners at bay before they raced up the other end and opened the scoring, with Ole Gunnar Solskjaer’s men now on course for a crucial victory at the Theatre of Dreams.

Check out De Gea’s superb double save below.

De Gea’s double save before McTominay’s goal was unreal pic.twitter.com/GT7xaXIuW9