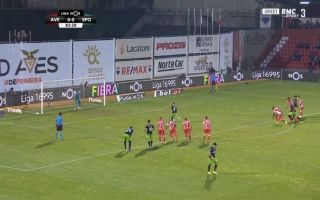 According to Don Balon, the Red Devils already have a deal in place to sign Fernandes in the winter transfer window, with Ole Gunnar Solskjaer desperate to add a creative spark to his midfield ranks.

The Portuguese star has been in fine form for Sporting once again at the start of the 2019-20 campaign, contributing four goals and three assists in seven appearances.

Fernandes netted his fourth goal of the season in a Primeira Liga clash at Aves this evening, calmly slotting home a penalty kick with less than ten minutes left to play.

Fernandes in action for Sporting

Check out the Man United transfer target’s expert spot-kick which ended up giving Sporting a 1-0 victory below.