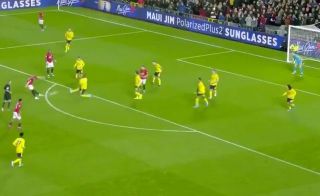 Man Utd scored what could prove to be a vital goal just before half-time as they took the lead against Arsenal at Old Trafford on Monday night.

It was a hard-fought encounter in the opening 45 minutes as both sides had chances to break the deadlock, but they were forced to wait until the very end of the first half to find a breakthrough.

As seen in the video below, it looked as though Man Utd had spurned a great chance as Marcus Rashford couldn’t get on the end of a cross to tap home.

However, he kept the move alive and his pass back into the middle found McTominay just outside the box, and he left fly with an excellent strike, which appears to have perhaps taken a slight deflection, which went straight into the top corner to give Bernd Leno no chance.

It’s always a big blow to concede at that time in a game, and so it remains to be seen how Arsenal respond after the break as that will certainly have taken the wind out of their sails.

It took 45 minutes for a moment of quality but Scott McTominay delivers for Manchester United! ?

Scott McTominay with an absolute ROCKET to put Manchester United ahead.