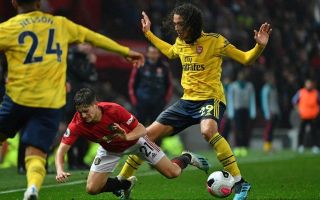 Unai Emery’s side were not at their best in a generally sloppy game, but scored a second-half equaliser through Pierre-Emerick Aubameyang to come away with a point.

MORE: Aubameyang does something no Arsenal player has managed for 22 years with goal vs Man United

Fabregas, however, was clearly impressed with how two of Arsenal’s youngest performers stepped up in this big game as he singled out midfielder Matteo Guendouzi and winger Bukayo Saka for praise.

Gotta love Guendouzi. Can play good or not so good but always shows up in difficult moments at such a young age. Big future ahead of him at @Arsenal

Arsenal fans will be excited to hear this praise from their former player, who knows a thing or two about what it takes to make a career for yourself after starting out young.

The Spaniard, now with Monaco, first broke into the Arsenal first-team when he was just 17 years old, and Gooners would be thrilled if Guendouzi and Saka could go on to be even half as successful for them as he was.

Arsenal don’t have the resources of their big six rivals, so rely on identifying the best young talent and bringing players through from their academy.