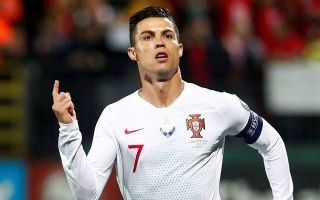 Cristiano Ronaldo has firmly established himself as one of the best players to ever play the game, but his glittering career is in its latter stages.

While the Juventus and Portugal superstar hasn’t yet shown any sign of letting up, he will turn 35 next year and so eventually he will have to consider hanging his boots up and closing the curtains on a brilliant playing career.

However, given his desire to be the best in anything that he does and his business acumen, he has already started discussing what he plans to do now and after he retires as he is set to try and conquer the business world too.

“I still love football. I love to entertain the fans and the people who love Cristiano. It doesn’t matter the age, it’s all about mentality,” he is quoted as saying by Sport Bible.

“The last five years I start to enjoy this process of seeing me outside of football, so who knows what will happen in the next year or two?”

The report goes on to add how Ronaldo has already launched his own underwear brand, denim, footwear, fragrance, digital agency, restaurants, gyms and hotels, and so the hard work has undoubtedly been ongoing off the pitch for some time.

As has been the case with his attitude and approach in training and when he takes to the pitch, Ronaldo sounds as driven and ambitious about his future plans as he does about his footballing achievements and records that he has been busy setting through the course of his brilliant career to date.

“I do not want to imitate anybody,” he added. “You have to be yourself all the time, but you can always pick up small details and take something from good examples, not only in football but in other sports as well – Formula 1, NBA, golf, UFC, whatever. The best athletes have a similar work ethic.

“Even the CEOs of great companies are always motivated and they have to work hard to achieve good things. This is what motivates me. Everyone has pressure – you have pressure to do a good interview with Cristiano – it’s how you deal with pressure that matters. You have to trust in yourself. In football, I have more control. I know what I can do. In business, it’s more difficult, you depend on other people, but I have a good team. It will be a challenge.

“It has taken many years of hard work, dedication and passion to achieve what I have in football. Outside of football I’m not there yet, but I’m a competitive guy and I don’t like to be the number two or number three. I always want to be number one. I will do it, 100 per cent.”