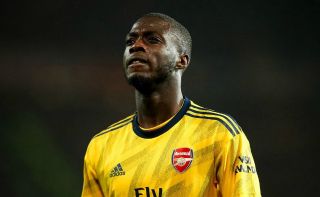 Arsenal star Nicolas Pepe has sent a defiant message to the club’s fans after his poor start at the Emirates Stadium.

The Ivory Coast international joined the Gunners from Lille this summer and arrived with plenty of expectation on his shoulders after some world class displays in Ligue 1.

However, Pepe just hasn’t got going yet at Arsenal and fans will no doubt be concerned that their club has over-spent on another flop.

AFC need some of their recent signings to do better after a lack of recent success, and Pepe is one they’ll have all had high hopes for.

Still, the 24-year-old was in no mood for hiding after the Manchester United game, in which he put in another underwhelming performance, missing some decent chances and disrupting his team’s flow with some poor decision-making.

Speaking about his poor start, Pepe made it clear he was confident he would improve, in what sounds like a reassuring message for concerned Gooners.

He told RMC Sport: “My first few games for Arsenal have not been easy. I have to be honest.

“I have not been as effective as normal in terms of my statistics and strike rate.

“They are not what they were when I played for Lille, or during our game against Liverpool at the start of the season.

“I need my confidence to return. But I am not very concerned.

“People can be concerned about my statistics, but I am not. I need to keep on working as the standard of play is different over here, and the language is different as well.

“It is a new league for me. I need to adapt quickly. But it won’t take me long.”