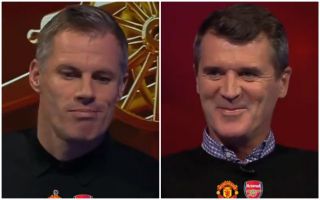 Manchester United legend Roy Keane was spotted failing to hide his joy as former Liverpool star Jamie Carragher admitted to struggling to get into the thick of the Premier League title race during his time at the club.

See the exchange in the video below as the pair were on punditry duty on Sky Sports last night for the game between Man Utd and Arsenal at Old Trafford.

"As Roy reminded me last week…" ?@Carra23 and Roy Keane are reacquainted for tonight's #MNF and Jamie hasn't forgotten! ?

Those two used to be the main title contenders every year as Liverpool went through a difficult patch, but the Reds are now way ahead of both sides.