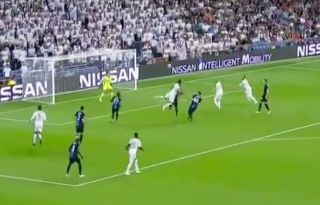 Real Madrid showed real heart and fight to scrap their way back to level terms against Club Brugge in the Champions League on Tuesday night.

Los Blancos appeared to be in all sorts of trouble after 40 minutes, as a double from Emmanuel Bonaventure Dennis put the visitors in total control.

With their pace and directness on the counter-attack, they were proving to be a handful for Real Madrid, who also couldn’t get going in the final third themselves.

However, Sergio Ramos got them back into the game just before the hour mark, and they eventually got themselves back on level terms late on as Casemiro rose highest and expertly guided the ball into the back of the net from a Toni Kroos delivery, as seen in the video below.

It was a classy goal, and a crucial one at that given Real Madrid need to pick something up having already lost at Paris Saint-Germain in their opening game of the group stage.

Video: Rash Casemiro sent off for Real Madrid vs Barcelona with two bookings in a minute
More Stories Casemiro