Real Madrid were in all kinds of trouble against Club Brugge on Tuesday night, and the visitors were certainly enjoying themselves at the Bernabeu.

Emmanuel Bonaventure Dennis scored both goals for the Belgian outfit, the first of which was rather fortunate as it didn’t appear as though he knew too much about his finish.

However, he showed real quality for his second as he raced clear of the Real Madrid defence with great pace before dinking his effort over Thibaut Courtois to leave the home faithful stunned into silence.

He wasn’t done there though as the 21-year-old thought he’d really go all out at Cristiano Ronaldo’s former playground as he copied the Portuguese superstar’s infamous celebration, as seen in the video below.

It’s unclear how that would have gone down with the man himself, as he surely wouldn’t have found it particularly flattering given who the goal came against and the struggles that Zinedine Zidane and his side are going through so far this season.

Nevertheless, with Juventus also in action on Tuesday, Ronaldo probably had more important matters on his mind although given Dennis is going viral after both his performance and celebration, it will be hard for Ronaldo not to come across it after the game. 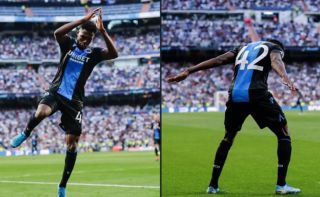 Video: ‘I did it to show them they miss something’ – Club Brugge star reveals reason for Ronaldo celebration vs Real Madrid 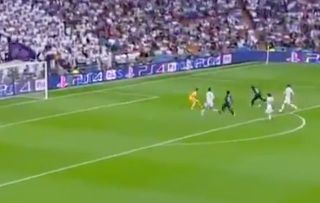 Video: ‘I did it to show them they miss something’ – Club Brugge star reveals reason for Ronaldo celebration vs Real Madrid October 2, 2019 7:49
Champions League