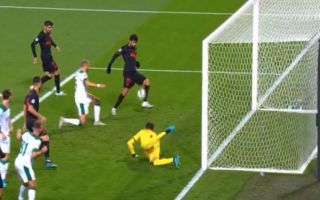 This is one of these misses that happens regularly in 5-a-side games but is absolutely criminal in the Champions League.

Diego Costa can possibly try to claim that this came at him quickly or he was unsighted, but it’s still no excuse.

He’s unmarked, the keeper is out of position and all he has to do is hit the target from one yard out.

It’s a horrific miss and it’s hard to see it being beaten this season:

The Atletico Madrid striker has been prolific in Madrid and during his time at Chelsea. He’s scored 177 career goals but often seems to be remembered for trying to wind the opposition up and fight rather than his ability.

Anyone who doesn’t like him will watch this miss with glee.