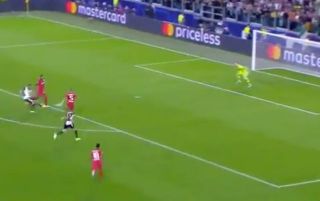 The reigning Serie A champions were held by Atletico Madrid in their opening game of the group stage, and although they squandered a commanding lead, picking up a point away in the Spanish capital would have been seen as a decent result.

However, to make it really count they will have been eager to get off to a winning start at home, and Higuain gave them an early enough lead against the Bundesliga outfit with an excellent goal.

As seen in the video below, the Argentine forward was slightly fortunate that the ball broke to him on the edge of the box, but there was nothing fortunate about the finish as he found the bottom corner with a world-class effort.

It hasn’t been easy for the 31-year-old to cement his place in the Juventus starting line-up over the past 12 months or so having also been shipped out on loan to AC Milan and Chelsea, but Maurizio Sarri appears set to give him another chance this season.

If he continues to score goals like this one, it will undoubtedly help Juventus get to where they want to be and in the hunt for major trophies, and it will certainly keep him in the side.

Higuaín does it himself ? pic.twitter.com/ZkZgoGdSUk

One touch to control, another to rifle it home ??

Gonzalo Higuain has the ball on a string, and his Juventus now lead against Leverkusen.#OptusSport #UCL pic.twitter.com/I0VHyPpU9x