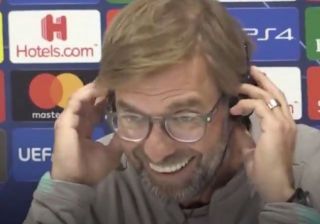 Liverpool boss Jurgen Klopp is one of the most likeable characters in football, and he showed his brilliant sense of humour again on Tuesday.

As seen in the video below, the German tactician was busy at his pre-match press conference ahead of Liverpool’s clash with RB Salzburg in the Champions League this week.

However, one of the journalists attending was keen to ask him about the talk of a possible ineligible player featuring for the Merseyside giants in the League Cup last month.

As noted by The Guardian, Klopp went on to concede that the Reds could be in hot water over the incident, with Pedro Chirivella potentially at the centre of a storm which could lead to disciplinary action from the FA.

Before things got too serious though, the journalist in question couldn’t quite get his words out and stumbled as he tried to say ineligible.

Klopp showed his lighter side and his humour by putting his headphones on to suggest that he was looking for a translation, and that unsurprisingly gained some laughs from the reporters around him.

He certainly knows how to deal the media, and this was another example of why he’s so well liked in and out of the game…

Jurgen Klopp's reaction to a journalist getting tongue-tied… Priceless ? pic.twitter.com/5ry4kKl5gF