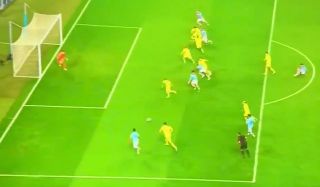 Man City were relentless in their bid to find a breakthrough against Dinamo Zagreb on Tuesday night, and it was Raheem Sterling who eventually found a way through.

City made changes as they looked to make it two wins in two to start the new Champions League campaign, but given their quality depth, they were still highly fancied to secure all three points.

However, to their credit, the visitors made it very difficult for them to find a breakthrough as City had to wait well into the second half before finding the back of the net.

As seen in the video below, it was arguably worth the wait as they produced some wonderfully intricate and accurate passing to carve open the Zagreb defence, and Sterling was on hand to apply the finishing touch to put them in a commanding position.

It was threatening to become a frustrating night for the reigning Premier League champions, but they’ll be delighted if they can now hold on to their lead and secure another victory.