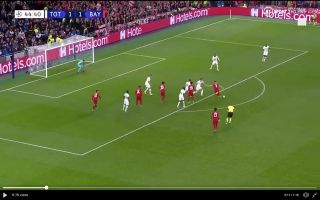 Bayern Munich superstar Robert Lewandowski has showed off his killer instinct against Tottenham tonight, take a look at the forward’s stunning finish to make it 2-1.

Robert Lewandowski has fired Bayern Munich into the lead against Tottenham on the brink of halftime.

The forward showed off some surprising fancy footwork by effortlessly flicking the ball over Jan Vertonghen, the ball spilled around the edge of the box after the star’s initial cross came to nothing.

Lewandowski then showed off his clinical nature by snatching the ball and rifling it into the bottom corner – without even looking at the goal.

This may be the best goal we’ll see in the Champions League this week.

Take a look at the Pole’s stunning goal below:

You can not give Robert Lewandowski an inch!

So clinical. So deadly!

Lewy at his best ? pic.twitter.com/hrRTpk0Nt1

Here’s a closer look at Lewa’s stunning skill to get past Vertonghen which led to the goal:

There’s no doubt that the 31-year-old is one of the best strikers in the world after a goal like this. The star has been absolutely prolific since his move to Bayern.