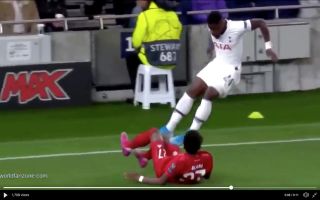 Tottenham defender Serge Aurier has sparked controversy after he appeared to stamp on Bayern Munich star David Alaba in the early stages of tonight’s UCL clash.

Less than 10 minutes into this evening’s mammoth Champions League clash between Tottenham and Bayern Munich, right-back Serge Aurier appeared to stamp on Bavarians ace David Alaba after being beaten to the ball.

Aurier’s attempt to jump over Alaba’s sliding challenge fell very short, the Frenchman came crashing down on his counterpart with both feet.

The former Paris Saint-Germain star doesn’t seem to be taking a rest from reckless play, the ace was sent off during Tottenham’s match with Southampton last weekend.

Take a look at the full-back’s dangerous challenge below:

aurier.. you need to calm down blud pic.twitter.com/ascLDCKnKs

i'm no expert but i don't think that Aurier's attempt to avoid stamping on Alaba has succeeded… pic.twitter.com/gb2JqffUfN

Even with VAR being used Aurier managed to escape being carder for his reckless challenge. How has he got away scot-free with this one?

We don’t know how Alaba continued to play after the challenge. The Austrian star even managed to make a goal-line clearance later in the game, the left-back is an absolute machine.