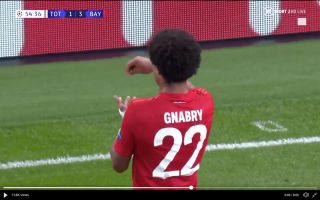 Bayern Munich sensation Serge Gnabry looks to have sealed a victory for the Bavarians against Spurs tonight with his quick-fire double, Arsenal fans will love this.

The ace’s first goal came in the 53rd minute, after effortlessly gliding past Aurier, Gnabry cut into the box and fired the ball into the bottom corner.

The forward made it 4-1 after being played in by teammate Corentin Tolisso. Tottenham’s defence looked asleep as he was left free to drill the ball into the back of the net.

Take a look at the 24-year-old’s lovely goals below:

Gnabry then dished out his signature celebration, he’s certainly cooking up a storm right now:

Gnabry has been unstoppable for club and country over the past year. We really can’t believe that Arsenal let this man leave for peanuts.

They spent the big bucks to bring wide forward Nicolas Pepe to north London but they could’ve trusted the process and has a ready-made superstar on there hands.

I guess they can all blame Tony Pulis for the decision to sell the star, hard to believe that this same man couldn’t get a game for West Brom.