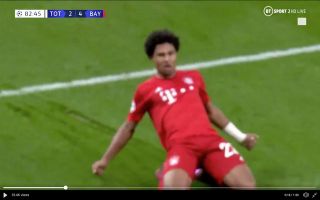 Serge Gnabry scored four goals in the second-half of this evening’s Champions League clash between Bayern and Spurs, take a look at his third and fourth below.

Arsenal academy graduate Gnabry sealed a hat-trick in the 83rd minute of the tie, the wide forward latched onto a sensational pass from Thiago that was played over the top of Tottenham’s defence.

The Germany international charged towards goal before sliding the ball into the back of the net.

Take a look at Gnabry’s first two goals of the game here.

Gnabry made it 7-2 in the 88th minute to round off a sensational performance from his side. The 24-year-old made a perfect run into space before being picked out by Corentin Tolisso.

The star controlled the ball before blasting it into the back of the net. Gnabry put on a finishing masterclass tonight, the world’s top wide forwards should be taking note.

Take a look at Gnabry’s third and fourth goals below:

What a return to North London ? pic.twitter.com/ejqPayKgTE

Gnabry has been unstoppable tonight. I’m sure Arsenal fans will have a field day after seeing their academy product tear Spurs apart.

How did the Gunners let a talent like this go?