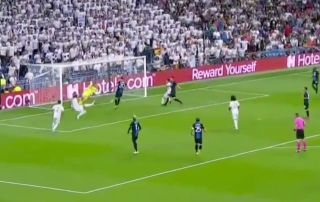 Real Madrid looked at real risk of suffering another defeat in the Champions League on Tuesday night, but Sergio Ramos gave them a huge lift.

The Spanish giants fell 2-0 behind at home against Club Brugge in the first half in what was a nightmare way to try and bounce back from their thumping at Paris Saint-Germain in the previous game.

SEE MORE: “Definitely getting sacked”: These fans question Zidane’s future after horror first half vs Brugge

It looked as though Zinedine Zidane’s men were on the ropes and at risk of seeing their night go from bad to worse as things went on, but finally the Bernabeu was given a reason to get behind the team.

As seen in the video below, Sergio Ramos was marginally onside as he rose at the back post to nod home yet another crucial goal for Real Madrid just before the hour mark.

It remains to be seen if that gives the hosts the lifeline they needed to get something from the game, but the atmosphere and intensity certainly changed after that goal as Real Madrid took charge immediately after and looked much more of a threat.

Ramos has delivered time and time again for Los Blancos, but they’ll hope it doesn’t turn out to be a mere consolation effort.

Real Madrid have one back!

After a VAR check it's decided that Sergio Ramos is on side! pic.twitter.com/DuGqDlfFVw