Man United fans have urged Rio Ferdinand to help them sign Bayern Munich midfielder Thiago Alcantara after the ex-Red Devils tar posted a picture of hm and the Spaniard on Twitter.

Thiago came off the bench for Bayern during their 7-2 win over Spurs in the Champions League last night, with the former Barcelona man bagging an assist for his troubles during the game as well.

Following this, Ferdinand caught up with the midfielder after the match, posting a picture of the two of them on Twitter.

And this post prompted United supporters to beg Ferdinand to play the role of ‘Agent Rio’ and help convince Thaigo to seal a move to Old Trafford.

Thiago has managed to establish himself as one of the best central midfielders on the planet in recent years, something United could definitely do with given the current options they have to choose from in the centre of the park.

bring him to united ?

Common agent Rio! Bring him back to the theater of dreams!

Get him to United!

Ask him to come to utd pleasee

Try poaching him for @ManUtd 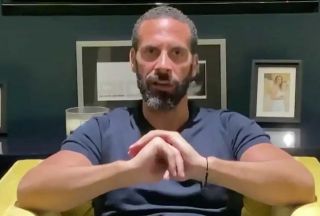