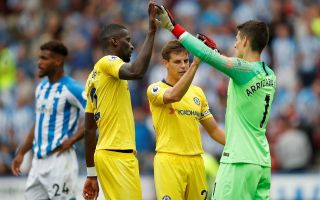 Chelsea manager Frank Lampard has hailed the club’s goalkeeper Kepa Arrizabalaga for his performances so far.

The Spanish international has made 63 appearances for the Blues since joining them from Athleticn Bilbao for a transfer fee reported to be £71.6 million according to Sky Sports. So far, he has kept 24 clean sheets across all competitions for Chelsea.

Kepa kept his first clean sheet of this season in last weekend’s match against Brighton and Hove Albion. Lampard has praised the Spaniard for his performances for Chelsea. As quoted by football.london, the Blues manager said: “Goalkeepers pride themselves on clean sheets. One of the things I’ve seen from Kepa this season from working with him is that he’s a very determined and very good professional who wants to improve. He goes about his work daily in a way that is very focused and I love that. In terms of confidence, his confidence shouldn’t go down.

“The clean sheets are not always his own responsibility. He knows that. But when there have been moments this season where he feels it may have been his responsibility he is very open to accept that fact and work to improve. I’ve been really impressed with him. He’s managed to become Spain’s No1 at the last squad which, when you think about who he’s competing against at that level, is something that’s very serious. He’s a great age for us.

“I thought the second half of last season particularly, I watched some of the games and some of his saves he was making to help Chelsea through to the Europa League final and get a Champions League spot. He grew as the season went on and he’s grown again now. I’m very happy with him as a player and if anything maybe I can say that in his status and role within the group he can become a bit more vocal and spread that around because I think that’s what great goalkeepers do and that’s part of the process as well.”

Kepa may not have made as many clean sheets this season as he made in 18/19 but he has produced some fine performances between the sticks for Chelsea. His good form has relegated David de Gea to the bench in the Spanish national and that’s some achievement. He always seems very confident on the pitch which is why he has often produced terrific saves. Provided Kepa maintains his good form, he could be considered to be among the best keepers in the world.

The Spaniard will be eager to help Chelsea register their first win of the Champions League against Lille tonight.