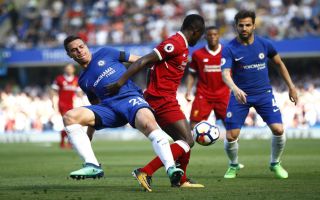 Former Barcelona, Arsenal and Chelsea star Cesc Fabregas took to Twitter this evening to reveal that he ranks Liverpool’s Mane as one of the top three players in the world.

Premier League legend Cesc Fabregas was keeping a close eye on the Champions League action this evening, the Spaniard took to social media to let fans know that he ranks Liverpool star Sadio Mane as one of the ‘top three’ players in the world.

Mane opened the scoring for Jurgen Klopp’s side against Red Bull Salzburg with this strike.

Mané for me is top 3 players in the world and has been for a while. Top top level.

The Ex-Barcelona, Arsenal and Chelsea star also revealed that he’d love to play with the forward:

Believe me he’s amazing. I’d love to play behind him.

This really is one of the highest bits of praise that one of today’s Premier League stars can receive. Fabregas sits second in the league’s all-time charts for assists with 111.

Fabregas has won it all during his career for both club and country. There’s no doubt that he’s one of the best midfielders to ever grace England’s top-flight.

Mane is starting to receive the plaudits for his phenomenal performances for the Reds over the last year, the Senegalese star has scored some crucial goals for the Merseyside outfit.