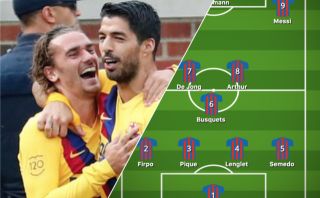 Barcelona take on Inter Milan in the Champions League this evening, as the Blaugrana look to bag their first win in the competition this season.

Valverde’s side succumbed to a 0-0 draw against Borussia Dortmund in their CL opener, as the Spanish giants came away from Germany with a solid point.

And now, Barca are set to take on Inter this evening, as they look to beat Antonio Conte’s side and bolster their chances of qualifying for the knockout stages.

For the match, we could see Valverde go with an all-star attack, after both Dembele and Messi were included in the club’s squad for Wednesday’s match.

Luis Suarez played the full 90 minutes against Getafe at the weekend, whilst Griezmann was taken off during the second half for Nelson Semedo.

Given this, we should expect to see the Uruguayan rested for tonight’s game, with Griezmann leading the line for the Blaugrana.

And given that Ansu Fati misses out, we could very well see Barca lead with an attack of Messi, Dembele and Griezmann, as they attempt to beat Inter at the Nou Camp.

Given how dominant they were against Getafe, all of Busquets, Arthur and De Jong should start again for the Blaugrana tonight.

Barca are able to control games with ease with both Arthur and De Jong in the middle, thus it’s essential that they start tonight in order to give them an edge over their opponents.

Given that Alba is still out, we should see Junior Firpo start at left-back, with Lenglet and Pique next to him at the heart of the home side’s defence.

Roberto played 90 minutes against Getafe on Saturday, thus we wouldn’t be shocked to see Semedo brought back in to start at right back later on this evening.

With all of this in mind, this is how we expect Barcelona to line-up against Inter Milan today… 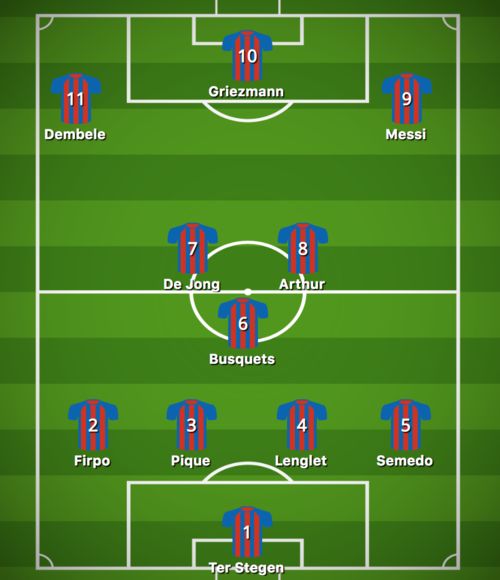