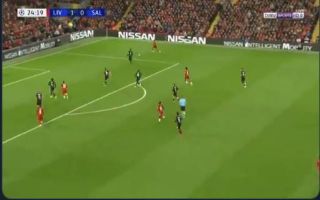 It’s almost getting to the point where you wonder if Jurgen Klopp has hired an Andy Robertson body double that he sends away on international duty to keep his man fresh for Liverpool.

The difference in his performances is remarkable, he showed his adventurous attacking instincts to score for Liverpool tonight.

He ends up being the furthest man forward as he gets onto a cross to fire his team 2-0 up:

Salzburg will be happy to get out of Anfield with a 2-0 loss given the way things are going, this could end up as another rout for Klopp’s men.