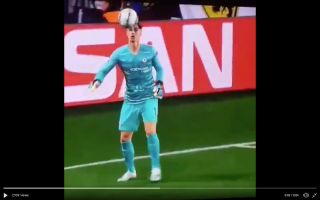 Chelsea goalkeeper Kepa Arrizabalaga showed that there is levels to being good with your feet between the stick by effortlessly pulling off kick-ups against Lille.

In the early stages of Chelsea 2-1 Champions League win against Lille this evening, goalkeeper Kepa Arrizabalaga showed off his sensational ability with the ball at his feet.

The Spain international effortlessly controlled the ball before kicking it up with his knee and clearing the ball away.

The star managed to do all of this while being pressed by a Lille player, Kepa is crazy.

Take a look at the Spaniard’s fancy footwork below:

The 24-year-old has looked impressive since his marquee move to Chelsea last summer. The ace has also displaced Manchester United superstar David de Gea as Spain’s number one during this period.

The Blues have a stopper that can play out from the back and pull off stunning saves for the next ten years.

Video – “Filling me with more confidence” – These Chelsea fans already prefer Mendy to Kepa after a sharp double save vs Spurs September 29, 2020 21:15
Tottenham FC