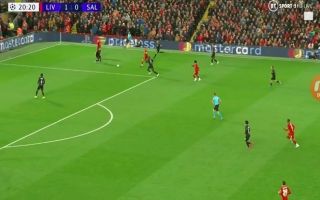 Liverpool looked unstoppable before conceding their first goal against Red Bull Salzburg, take a look a look at this magical piece of play from the first-half below.

Just minutes before Andy Robertson’s goal in the 25th minute of the clash, Jordan Henderson played a lovely one-two with Roberto Firmino.

This wasn’t a usual one-two though, this had some special flair added to it.

Unfortunately Salah couldn’t find enough room to hit the back of the net after being crowded out.

Take a look at the stunning link-up play below, courtesy of BT Sport:

This goal could’ve been the best goal of the year if Salah managed to get away from his man and tuck the ball into the back of the net.