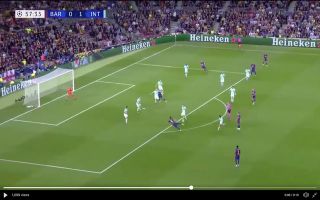 Luis Suarez has scored a magnificent volley to draw Barcelona level against Inter Milan, the superstar hammered the ball into the bottom corner from the edge of the box.

Barcelona have equalised against Inter Milan in the 58th minute of this evening’s mammoth Champions League clash. Ex-Juventus star Arturo Vidal picked out Luis Suarez with an inch-perfect pass.

Suarez looked as though he was in his own world as he focused on the ball before striking a perfect volley, the effort flew into the bottom corner and even Handanvoic had no chance of stopping this.

Take a look at the Uruguayan’s amazing strike below:

Suarez has been subjected to boos recently, what a way for the Ex-Liverpool star to silence the critics. He’s also given Ernesto Valverde a lifeline with his strike.