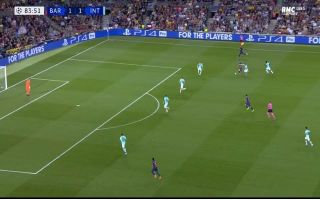 If you want an idea over how much Inter have improved since Antonio Conte took over, this game shows it. Barcelona have really struggled and Inter will consider themselves unlucky to leave with nothing.

The Italians constantly looked dangerous on the break, but Luis Suarez struck twice to give Ernesto Valverde’s men a crucial win.

Messi managed to draw the attention of at least four defenders, before a bit of skill saw him slip Suarez in towards goal. The clinician finish shows the Uruguayan at his best:

Beautiful first touch from Suarez to set himself through on goal, now 2-1 Barcelona.#UCL #BarcaInter pic.twitter.com/CdEenfOhE4

After the opening draw with Dortmund, it was crucial for Barca to get back on track with a win at home.