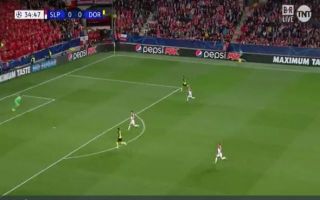 It seems that Real Madrid’s youth system is only really there to make the club some money as they sell the youngsters on. Occasionally some get a chance in the first team, but they find themselves out the door quickly.

Achraf Hakimi joined Borussia Dortmund on a two year loan last year, and he’s started to look impressive. The Bundesliga website reported on the signing last year but doesn’t confirm if there is a buy out option for the German club.

If he keeps up his current form then you have to think Dortmund will want to keep him. He opened the scoring in the Champions League tonight with this superb goal against Slavia Prague:

What a fucking goal HAKIMI!pic.twitter.com/Dss8fNlTrQ

He shows tremendous pace before turning the defender and keeper inside out. He makes them look foolish before his great finish sealed a fantastic solo goal.

Dortmund have a tough group featuring Barcelona and Inter Milan, so wins against Slavia will be crucial to them going through.