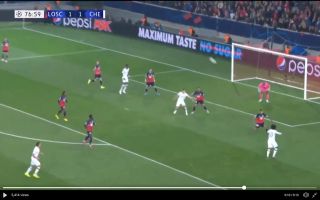 Willian scored a stunning volley for Chelsea to seal a victory for the Blues in their Champions League clash against Lille, the ace has silenced the critics with this.

In the 77th minute of this evening’s Champions League tie between Lille and Chelsea, winger Willian produced a moment of magic to inspire the Blues to victory.

Chelsea wonderkid Callum Hudson-Odoi took just 10 minutes to show his class after coming off the bench. The England international played a looping cross into the box which Willian capitalised on.

The Samba star had his eyes fixed on the ball before unleashing a perfect volley on goal, the keeper had no chance of stopping this from hitting the roof of the net.

Check out the Brazilian’s stunning strike below:

Willian is often heavily criticised by some of Chelsea’s fans, the Blues faithful will have to cut the 31-year-old some slack after this crucial strike.