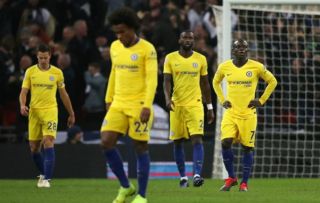 Real Madrid president Florentino Perez is reportedly lining up a bid of around £115million to seal the transfer of Chelsea midfielder N’Golo Kante.

The France international has been a world class performer in his time in the Premier League with Chelsea and former club Leicester City, and it’s easy to see why he’d be targeted by a big name like Real Madrid.

The Spanish giants could do with a top class defensive midfield player in their squad and Don Balon claim Zinedine Zidane has informed Perez that Kante would be his ideal option for that role.

Chelsea recently lost Eden Hazard and Thibaut Courtois to Real as well so could do without seeing another of their best players poached.

Still, it’s hard to imagine them keeping hold of Kante for much longer if they can’t challenge for major honours or qualify for next season’s Champions League – neither of which look a given by any means.

Kante would likely have more chances to win major prizes at the Bernabeu alongside his old team-mates Courtois and Hazard.