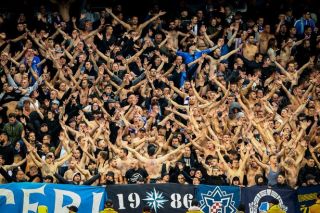 Man City have been charged by UEFA after there were some unsavoury incidents during their clash with Dinamo Zagreb this week.

The two sides met on Tuesday night in the Champions League at the Etihad, with Pep Guardiola’s men securing a 2-0 win to further boost their hopes of comfortably advancing out of the group stage.

SEE MORE: “He deserves to play”- Pep Guardiola apologises to Manchester Ctiy starlet for not giving him enough first-team opportunities

However, as noted by the Daily Mail, City have been charged by UEFA after objects were thrown during the encounter, while Dinamo also face disciplinary action after their fans were accused of the same as well as damaging seats at the ground in the away end.

It’s disappointing to see such events now make the headlines and overshadow the game, as ultimately it’s sometimes difficult to understand the point behind such actions.

Instead of enjoying the spectacle and the night itself, some evidently decided to take a different approach and cause damage as well as earn their respective clubs charges from UEFA which will now potentially result in further action being taken.

Nevertheless, for Guardiola and his Man City side that’s now two wins in two to start the Champions League campaign as they sit top of Group C and look to be in a commanding position ahead of Dinamo, Shakhtar and Atalanta.

It’s added by BBC Sport that a hearing will take place on October 17 to discuss the matter, after which Man City will expect to hear what the verdict is in terms of whether or not any further action will be taken by the governing body.