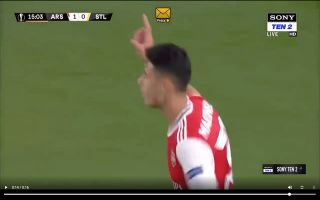 Arsenal ace Gabriel Martinelli seems to be a really exciting player for the Gunners, the ace has bagged a quick-fire double against Standard Liege tonight.

Promising Arsenal youngster Gabriel Martinelli opened the scoring for the Gunners against Standard Liege in the 12th minute of this evening’s Europa League clash.

Fellow summer signing Kieran Tierney beat his man on the left-wing before firing a pinpoint cross into the box, 18-year-old Martinelli nodded the ball into the back of the net with a superb header.

The forward grabbed his second of the night less than three minutes later.

Exciting prospect Reiss Nelson fired a low cross into the box and Martinelli showed lovely composure to control the ball, create some space and then curl the ball into the back of the net.

Check out the Brazilian’s brace below:

Gabriel Martinelli is the future ???

What a ball from Kieran Tierney as well! pic.twitter.com/mEZLtpJ7da

Arsenal fans may start calling for Martinelli to get some more action in the Premier League after his impressive performances for the Gunners in cup competitions.