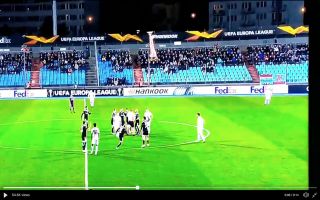 Qarabag’s Europa League clash with Dudelange was briefly suspended when Qarabag players attempted to kick down a drone with a Nagorno-Karabakh flag.

The referee had no choice but to briefly suspend Qarabag’s clash with Luxembourg outfit Dudelange after Qarabag’s players attempted to kick down a drone that was flying over the field.

The Independent report that the flag being carried was that of the Nagorno-Karabakh region, the long-standing conflict over the region has led to there being no diplomatic relations between Azerbaijan (where Qarabag are from) and Armenia.

Take a look at the shocking incident below:

Dudelange v Qarabag suspended as drone carrying Armenian flag hovers over the pitch. Qarabag players trying (and failing) to kick it down pic.twitter.com/REceYDjpr1

I love football. A Europa League match suspended because someone’s parked a drone carrying an Armenia flag over the centre circle and the Qarabag players have stopped the game to try (and fail) to knock it down ??? pic.twitter.com/oVUSjumelF

With all respect to the ongoing issues between the countries, it’s disheartening to see that an honest game of football has now been overtaken by a political issue.