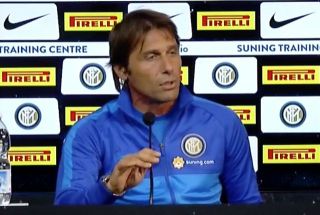 Inter are reportedly lining up a swoop for Lazio midfielder Sergej Milinkovic-Savic in January as they look to bolster Antonio Conte’s squad.

It’s been a fine start to the campaign for the Nerazzurri as they’ve rattled off six consecutive wins in Serie A to sit top of the standings.

In that time they’ve scored 13 goals and conceded just two, and as they sit two points ahead of rivals Juventus ahead of the Derby d’Italia on Sunday night, Conte will be pleased with their domestic form.

However, they have faltered in the Champions League, and so they could still be eyeing further reinforcements to the squad to ensure that they can continue to compete on multiple fronts moving forward.

As reported by Calciomercato, via the paper edition of Tuttosport, it’s now suggested that Inter could use the funds raised from the sale of Gabriel Barbosa and put that towards trying to prise Milinkovic-Savic away from Lazio in January.

The Brazilian ace is currently on loan at Flamengo until December 31, and so it remains to be seen if either they make that switch permanent and splash out or if his form back in his homeland has attracted interest from elsewhere to allow Inter to offload him.

It’s added that the funds raised from that sale could then go towards signing Milinkovic-Savic, who has continued to establish himself as a pivotal figure for Lazio in midfield.

The 24-year-old had a quiet season last year, but he’s already bagged two goals and four assists in eight appearances across all competitions this campaign.

In turn, with his physicality, agility, defensive solidity and threat in the final third, he could be a quality addition for Conte to continue to take Inter forward and to ensure that they compete for major trophies across the board.