Barcelona take on Julen Lopetegui’s Sevilla in La Liga on Sunday, as the Blaugrana look to make it four wins in a row in all competitions following their victory against Inter Milan in midweek.

Barca managed to bag their first win in the Champions League this year against Antonio Conte’s side on Wednesday thanks to a second half double from Luis Suarez.

It was the club’s third win in a row in all competitions, which came following their La Liga victories against both Villarreal and Getafe in recent weeks.

And this weekend, Barca will be looking to make it three in a row in the league, as they take on Sevilla at the Nou Camp in what should be a tricky test for Valverde’s men.

Sevilla currently lie in sixth place in La Liga, levels on points with Barca, with goal difference being the only difference between the two sides at this point in the season.

With this in mind, Barca will need their strongest XI out on Sunday in order to try and get all three points from the match.

Griezmann was taken off in the second half against Inter, thus he should be a little fresher than Suarez, something that should encourage Valverde to start him over the Uruguayan.

Dembele made a brief, but impressive, cameo appearance against the Nerazzurri, as the Frenchman looked to get some much-needed minutes under his belt.

If Suarez is dropped in favour of Dembele, Valverde should start the youngster out wide, something that means Griezmann will be made to start in the middle alongside his French compatriot and, of course, Lionel Messi.

All of Busquets, Arthur and De Jong played in midweek, thus we wouldn’t be shocked to see one of them replaced by Vidal on Sunday, especially when you consider the positive impact the Chilean had when he came on against Inter.

It doesn’t seem as if either Firpo or Alba will be 100% fit in time for Sunday’s game, thus Semedo is most likely going to be selected to fill in at left back in their absence.

Youngster Jean-Clair Todibo should be given his chance to sign in two days time given that Lenglet is suspended for the match after picking up two yellows vs Getafe.

The Frenchman should be starting alongside Pique and Roberto, as well as Semedo at the back for Barca, as they look to keep just their second clean sheet of the season.

With all of this in mind, here’s how we think Barca should line-up vs Sevilla on Sunday… 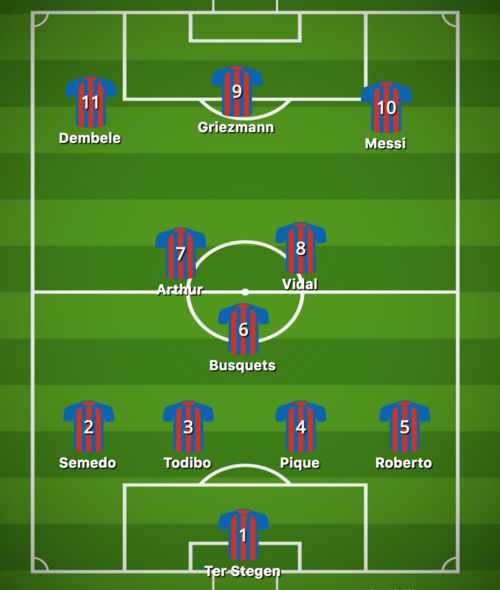